In Time of War features music encompassing a kaleidoscope of emotions, forged during the heat of armed conflict. At the height of the siege of Budapest in 1945, Kodály had taken refuge in a cellar where he completed his dramatic and passionate Missa Brevis. Schütz wrote his collection of Geistliche Chormusik during the Thirty Years’ War as a legacy to future young composers, in the belief that his world was about to be utterly destroyed. In 1918, Howells’ turbulent Third Rhapsody for organ was written in a single night during a Zeppelin raid over York. Standing as I do before God by CCC President, Cecilia McDowall is, as the composer says, a reflection on the eve of Edith Cavell’s death, 12 October 1915. Britten’s scintillating Ballad of Little Musgrave was written for, and first performed by, British prisoners of war in Germany. There is much beauty and profundity to be experienced in this programme of music shaped and overshadowed by war. 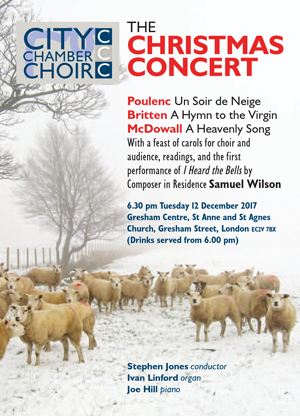 A varied programme to get you into the mood for Christmas. The wintry scene is set by Poulenc’s atmospheric Un Soir de Neige while Chilcott’s Christmas Day 1666 paints a cosy picture of domestic celebration. Two ‘firsts’ this year are a new piece by Composer in Residence Samuel Wilson and an arrangement of a favourite carol by Music Director Stephen Jones. As usual, there are some chances for the audience to join in with old favourites and also to meet the choir over a drink and a mince pie before and after the concert.

Tickets £35.00 (including music, and tea and coffee throughout the day) 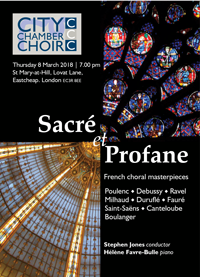 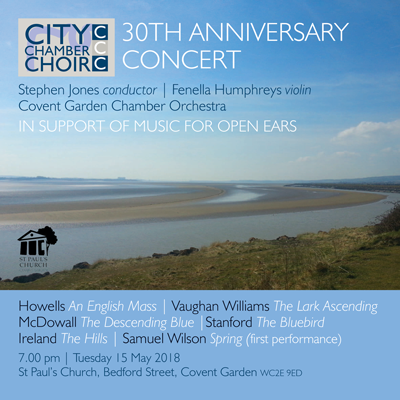 CCC celebrates 30 years of music-making with a concert closely aligned to some of the choir’s key themes over the years: 20th century British music, overlooked master­pieces and the commissioning of new music.
Music Director Stephen Jones writes: “For our 30th anniversary concert pride of place goes to Herbert Howells’ wonderful but rather neglected An English Mass dedi­cated to Harold Darke and the St Michaels Singers, another long established City of London choir. As a young composer Howells had been inspired by the music of Vaughan Williams, whose celebrated The Lark Ascending has in its turn inspired Cecilia McDowall’s The Descending Blue. We also première Spring, a setting of Gerard Manley Hopkins’ poem by our Composer in Residence Samuel Wilson.”

The choir is delighted to be working for the first time with Covent Garden Chamber Orchestra and renowned violinist Fenella Humphreys. 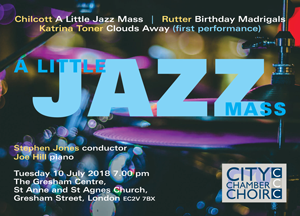 An attractive and uplifting programme of toe-tapping music from Bob Chilcott and John Rutter – two of the foremost choral composers of our day – plus a series of masterful arrangements of some well known jazz standards. We also give the first performance of Clouds Away by our Composer in Association Katrina Toner.