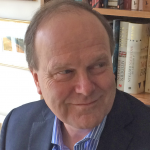 Stephen Jones has been Music Director of the City Chamber Choir since he founded it in 1987.

Stephen has wide experience as a conductor, singer, and pianist. He has worked with many leading choirs, ensembles and orchestras.

He studied piano and singing at London’s Trinity College of Music, and has sung with the London Sinfonietta, Collegium Musicum of London and the choir of St Peter’s, Eaton Square. Between 1973 and 1981 he was a deputy vicar choral at St Paul’s Cathedral, Westminster Abbey and Westminster Cathedral.

He has been Musical Director since 1994 of one of Hertfordshire’s premier choral societies: the award-winning Aeolian Singers .

As a conductor and chorus master he has worked with several top choirs. He is also a tutor on the Association of British Choral Directors’ conducting and accompanists course.

Stephen has conducted massed choirs in a performance of Handel’s Messiah for the British Council for the Prevention of Blindness and many concerts with massed choirs of young people. As a choral animateur he has worked with the British Federation of Young Choirs, the National Association of Music Educators, Schools Music Association and the Open University.

His expertise also extends to light music: he was a member of the close harmony male voice quartet Original Blend, who made frequent radio and television appearances.