A varied programme to get you into the mood for Christmas. There are two substantial works for choir and harp: Britten’s much loved and atmospheric A ceremony of carols and John Owen Edwards’ fantasia on carols Wassail! The contemporary is not neglected as we come right up to date with the winner of the 2015 BBC Radio 3 Breakfast Carol Competition, Comes the light by Ann Burgess. Greg Rose’s It’s snowing presents an extra­ordinary and magical vocal picture of snowy weather, using aleatoric effects.

As usual, there are some chances for the audience to join in with old favourites and also to meet the choir over a glass of wine and a mince pie before and after the concert. 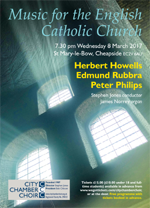 7.30 pm Wednesday 8 March 2017 Music for the English Catholic Church
CCC brings together some of the finest sacred choral works by Edmund Rubbra along with his contemporary Herbert Howells, acknowledged master of 20th century choral music. Howells’ composition teacher Stanford encouraged him to listen to R. R. Terry’s pioneering choir at the newly completed Westminster Cathedral giving their ground-breaking performances of Renaissance polyphony: his Latin Motets are early fruits of this experience. He would undoubtedly have heard music by the English 16th century recusant Peter Philips, and we include two of Philips’ settings of Salve Regina from his Cantiones Sacrae.
Stephen Jones conductor

7.30 pm Tuesday 16 May 2017 – Terpsichoreana
Charity concert in aid of Health Poverty Action
‘The dance’ is the theme of this concert, and features Malcolm Pearce’s delightful Terpsichoreana complete with brass and percussion, Britten’s Choral Dances from his opera Gloriana, and a wealth of shorter pieces extolling the virtues of this universal and ancient art form that is inextricably linked to music. 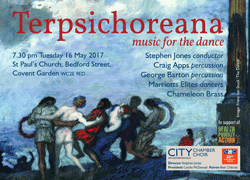 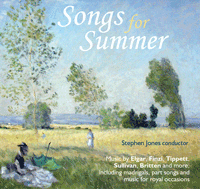 An opportunity to hear City Chamber Choir away from their usual City of London setting. This out-of-town charity concert in aid of Stroke Association is part of the  Brookmans Park, North Mymms and Potters Bar Community Arts Festival. 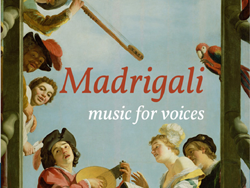