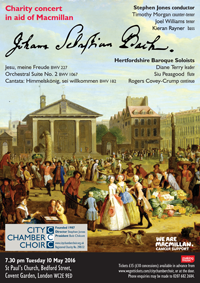 7.30 pm Tuesday 12 July 2016 – Tongues of Fire
Concert to commemorate the 350th anniversary
of the Great Fire of London

The concert features music that would have been heard in London around 1666 as well as more modern works on the subject of fire, including the world premiere of a piece commissioned by the choir specifically for this concert. Where London Stood by Samuel Wilson, sets words from a contemporary ballad that graphically describe the damage and devastation caused by the inferno that blazed for four days in the heart of the capital.  There are also readings, using words written at the time to explore how the fire was seen and experienced and the impact that it had on London’s inhabitants. So come along to hear music and words sung and spoken in the heart of the City of London, with a choir firmly rooted in the City of London, in a concert inspired by an event that changed the City of London forever.